There have been many mouthpiece fads in the saxophone world over the years. From the peashooter metal mouthpieces of the Michael Brecker and Eric Marienthal era, wooden mouthpieces and ligatures made popular by Joe Lovano, and massive tip openings made popular by Ernie Watts, just about any saxophone mouthpiece could be thrust into the limelight if the right musician is using it.

Even with so many fads going by throughout the years, there have been alto mouthpieces popular throughout many different musical genres that haven’t left the limelight since they burst onto the scene. These mouthpieces are what I like to call “The Greats.”

First up, we have our quintessential classical alto sax mouthpieces. These pieces have some particular design similarities that sets them apart from others in order to make them particularly suited to dominate the classical band soundscape.

Played by one of the original classical saxophone masters, Marcel Mule, the Soloist is easily the oldest classical mouthpiece design on this list.

This piece featured some distinctive specs:

The standard mouthpiece supplied with factory fresh Mark VI’s, the Soloist first became a favorite in the mid-1950s and was the only classical mouthpiece on this list that was able to not only work for classical but could work for jazz as well (as long as the tip opening was made bigger typically).

The Vandoren AL3, formerly AL4, is the newest, well-established, and one of the most well-respected pieces on this list.

Played by practically every respectable up-and-coming classical alto saxophonist, this is the new standard when it comes to classical mouthpieces today. It's renowned for its easy blow, beautifully pure sound, and fast response.

The newest mouthpiece on the scene, the D'Addario Reserve was released in January 2018 and has immediately become a solid competitor of the Soloist and the AL3.

Aside from being just as capable in tone production and playability, the Reserve also is able to add an extremely strong saxophone altissimo capability that the AL3 tends to lack. Best of all, the Reserve is the cheapest of all three options and considering it can hang well with the rest of them, I think this mouthpiece will have a very long life in the spotlight.

In contrast to the classical style of mouthpieces we just covered, jazz mouthpieces are meant to fit into loud, rowdy settings. Requiring typically a relatively brighter sound and stronger projection, these mouthpieces have larger tip openings available, small to medium height baffles, and depending on just how aggressive the artist wants to be, can have anywhere from large to small chambers.

Easily the standard jazz alto saxophone mouthpiece, the Meyer NY mouthpiece has stood the test of time and has nothing to prove at this point.

Truly a fantastic mouthpiece, this model has barely, if at all, changed since its inception in 1960. Many notable musicians have used this mouthpiece to great success, including Cannonball Adderley, Lou Donaldson, and Phil Woods.

Another pair of legendary mouthpieces, the Tonalin and Ebolin were contemporaries of the Meyer with totally different sound concepts. Depending on the specific model the player chooses, they also come in an attractive white color scheme.

With a more focused, brighter sound, the Ebolin/Tonalin (the only difference being that the Tonalins were white) were popular with artists such as: Charlie Parker, Eric Dolphy, and Johnny Hodges. 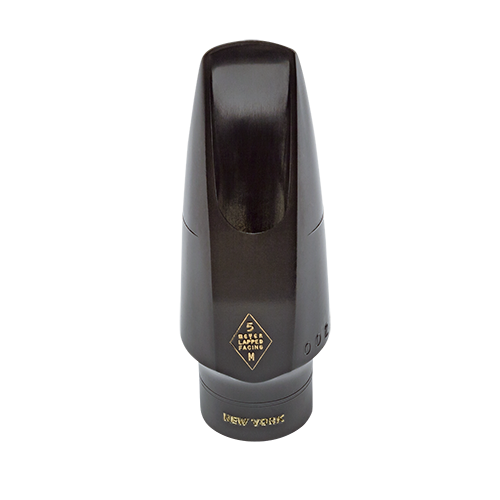 Meyer has been a trusted brand amongst professionals for over a century, and for good reason. With flexible sound and amazing playability, the Meyer Hard Rubber has been used in just about every musical style you can think of. Join the ranks of Cannonball Adderley, Phill Woods, and Art Pepper, get a Meyer!
Buy on woodwind brasswind

The youngest genre on our list today, Smooth Jazz and R&B both have their roots in jazz and the blues, but with their own twists. Another thing they have in common is the need for greater amounts of projection in order for the horns to be able to cut above the amped rhythm section.

Similar to the Meyer mouthpieces for jazz, metal Beechler mouthpieces are also the standard and therefore most common mouthpiece that is used in R&B/Smooth Jazz settings.

These mouthpieces are the easy choice for these genres as they give you a bright, cutting sound with great projection, and are still able to be toned-down for ballads quite easily. Popular artists that use them include Eric Marienthal, Boney James, Kenny G, Gerald Albright, and Dave Koz.

The original high volume, peel the paint off the walls with your sound alto mouthpiece, the Dukoff has been used in just about every horn section recorded since the early 70s.

Used by big names such as Michael Brecker and David Sanborn, the Dukoff metal is a truly legendary mouthpiece that is a high projecting piece with a tone that has a bit more depth than the Beechlers, but still give you the aggression that you want out of an R&B/Smooth Jazz mouthpiece.

Using custom Silverite metal, this mouthpiece is able to blend a bright and edgy tone, with depth and guts. If you are looking to be heard against wailing guitars and bombastic drum sets, this mouthpiece will help you get your sound heard all the way to the back of the stadium.
Buy on woodwind brasswind

Photo by Gavin Whitner |CC BY