There are so many questions running through the minds of parents of new trumpet players. How can I help them be successful? Am I going to go crazy with them practicing? What kind of equipment do they need?

In this article, we're going to address the process for choosing the appropriate beginner trumpet mouthpiece for your son or daughter or yourself!

The Mouthpiece That Comes In The Case

You'd think that an author of an article about beginning trumpet mouthpieces would be out shilling some magical mouthpiece that all beginners should start on.

But that's not the case here!

I taught middle school band and helped lots of students (and their parents) through the process of starting the trumpet for the first time.

And, if you picked up a new or gently used instrument from a local music store, or are renting a trumpet, there is a 99% chance that your trumpet is supplied with a new mouthpiece as well.

Now, I've heard a few different opinions from well-respected trumpet teachers about the best trumpet mouthpiece for students who are just starting out.

Some will adamantly argue that one has to take into consideration the size and shape of the student's lips, carefully taking into account how the mouthpiece feels: is it comfortable? Can they imagine practicing for hours and hours on this mouthpiece?

They draw an analogy with choosing a new pair of shoes. You wouldn't choose the exact same pair of shoes as the next kid in class, you'd need to make sure the pair was the appropriate pair for you.

Now given our desires for the absolute best experience for our children, combined with the trend towards a personalized education for students, you'd think this would be a logical process for selecting a mouthpiece.

When you pick out shoes, you have a generally good idea about what feels "right." When you start on a mouthpiece for the first time, it's a weird experience! Holding a circular piece of metal against your lips is something new that you'll get used to - it just takes time.

So my best recommendation is to use the mouthpiece that comes with the instrument. When the student has been playing for a while and has developed a stronger embouchure, then it may be worthwhile to examine different mouthpieces, when the student has more experience, and the teacher has a better sense of their personal needs.

Now that being said, not all mouthpieces are created equal. So what are some good mouthpieces to look for in the case? Or in the situation where you have a used trumpet that did not come with a mouthpiece, what are beginning mouthpieces that would be a good selection?

While every trumpet teacher and professor may have their own personal preferences, none can deny the impact that Vincent Bach (no immediate relation to Johann Sebastian Bach) had on the world of quality trumpets and trumpet mouthpieces. Bach came to the United States from Austria near the advent of World War I and played with the Boston Symphony and Metropolitan Opera.

Bach started tinkering with mouthpieces, and later the trumpets themselves, which he manufactured under the Bach Stradivarius label, still one of the most popular models around.

Today you can find many different manufacturers, each with their own line of decent quality mouthpieces. And yet, each of them uses Bach as the standard in which to compare their line of mouthpieces to. You can tell the impact of a single brand when everyone else compare's their products to yours!

Bach, now owned by Conn-Selmer, has a variety of different sizes of mouthpieces to meet the needs of trumpet players and different types of trumpets.

To keep it simple, Bach uses a number followed by a letter to describe the mouthpiece.

The numbers range from 1-20 and refer to the diameter of the mouthpiece rim. A larger number means a smaller rim, while a smaller number means a larger rim. Confusing, right? These mouthpieces also can have half and quarter sizes, some of which are special order only. But in general, half sizes are quite common.

The letters range from A through F, which refer to the depth of the cup. A models are the deepest cups, and F models have extra shallow cups which are preferred by high register players.

So that being said, which model of mouthpiece is most recommended for beginners? 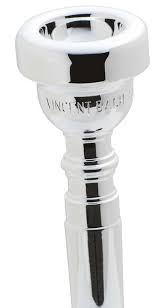 Medium / 16.20 mm / Medium wide, lowered toward the outside. Medium sharp inside edge. Well-rounded edge with a perfect grip. Probably the most widely used model in the world. Its brilliant tone is preferred by school musicians and by artists.
Buy on woodwind brasswind

The Bach 7C is perhaps the most selected mouthpiece in the world for trumpet playing. The C cup is a medium cup, perfectly versatile in a variety of playing situations. A beginning trumpet player will feel right at home on a 7C whether playing in concert band, marching band, or jazz ensembles.

And calling the Bach 7C a "beginner" mouthpiece is a bit of a misconception. Because it is such a well-rounded mouthpiece, it is included with many beginner trumpets and selected by many elementary band teachers as their mouthpiece of choice.

But there is nothing about the quality or composition of the mouthpiece that suggests that it is inferior to other mouthpieces in the Bach lineup.

In fact, professionals including Bud Herseth, Tim Hagans, and Freddy Hubbard all played prominent performances using the 7C. So don't get stuck with the mentality of there being "beginner" vs. "advanced" mouthpieces.

Now certainly, down the road, you might look at playing with other mouthpieces.

After you've been playing for a year or so, and feel comfortable with solid tone quality and a more developed embouchure, it might be worthwhile to look at other options.

In addition to the Bach 7C, the 3C is another common mouthpiece that beginners often transition to.

The 3C, like the 7C, is designed for general use, meaning that it will work great in a number of different ensemble and performance settings. However, many players prefer to transition to this mouthpiece for a deeper tone and improvement in the upper register of their playing.

If you have a mouthpiece in your trumpet case from a reputable manufacturer, this is the best way to go.

If you are looking for a new mouthpiece, Bach is generally the way to go. 7C is the most common, but 3C and 5C can also be good choices depending on comfort.

Other reputable manufacturers like Yamaha and Schilke provide a similar selection that can easily be compared to other Bach offerings.

When in doubt, try one out! Woodwind and Brasswind is great at providing 45 day trials in which you can return the merchandise for a full refund.

The Mouthpiece That Comes In The CaseThe Gold StandardOther OptionsClosing Advice