Clarinet etudes are essential to every clarinetist's daily practice routine.

I started playing etudes during my freshman year of high school. My private clarinet instructor introduced them to me. As a young player, I didn't fully understand the importance of learning etudes. I would play everything right on the page; correct articulations, dynamics, rhythms, and notes. However, my teacher still wanted more. I thought, "what more could there be?"

What is an Étude?

The word "étude" is french for "study". It is a short, instrumental composition designed to help musicians practice specific musical skills. They are written by musicians who are experts at the instrument. Etudes have a wide range of difficulty, ensuring that there are études for clarinetists of all levels.

Lyrical etudes for clarinet solidify sensations, lyricism, intonation, and tone. Lyrical etudes are most commonly played at a slow tempo.

Etudes are a significant part of the daily practice routine. I began playing etudes during my freshman year of high school.

Etudes incorporate clarinet scales. Every clarinetist should know and memorize their major and minor scales. Playing clarinet etudes every day will strengthen scale technique which includes muscle memory, finger coordination and dexterity, and note accuracy. Clarinet etudes will also help engrain all of the scales into your memory.

Every musician should feel comfortable and confident playing in any major or minor key. First, clarinetists should learn and practice their scales. Once the scales are well-learned, the clarinetist should practice etudes that are in different keys. Learning how to play in different keys through etudes will benefit you as you learn a more difficult ensemble repertoire.

Every musician should also feel comfortable playing in any time signature. Most etude books will feature selections in both simple and compound time signatures. 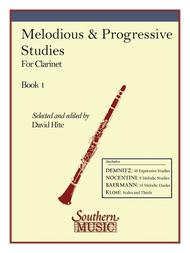 Rose 32 Etudes for Clarinet is an excellent etude book for intermediate to advanced clarinetists. This book includes both lyrical and technical etudes. The first two etudes are in C major, with no flats or sharps. As the etudes progress, more flats and sharps are added. The time signatures include 4/4, 2/4, 3/2, 6/8, 6/4, 9/8, and cut time. It is very important to know how to play in all of these time signatures because they will appear in solo and ensemble repertoire. The etudes start at an easier level and progressively get more difficult.

Now that you know the importance of clarinet etudes, incorporate clarinet etudes into your daily practice routine! Clarinet etudes will help you become a more well-rounded player and will prepare you for ensemble and solo repertoire.

How To Play A Clarinet Glissando