Hi clarinets! In this article, we will be talking about every clarinetist's best friend: clarinet reeds!

Reeds are very important in clarinet playing because without the reed, there would be no sound. Furthermore, it is important to understand the basics of clarinet reeds, which reeds best suits the clarinetist, how to take care of reeds, and understanding reed problems and solutions.

What is a reed?

When looking at a clarinet, you will see that there is a small, thin piece of wood resting flat against the mouthpiece. That is called a reed. The reed is made out of a Mediterranean reed grass called Arundo Donax, also known as cane reed. It looks similar to bamboo. Once the Arundo Donax has grown to its full size and dried in the sun, it is cut into flat, rectangular pieces. After that process is complete, it is planed down and polished. The reed is then sorted into strength categories, marked, packaged, shipped, and sold.

A sound on the clarinet is made when the clarinetist blows a constant and supported airstream through the instrument. The airstream and elasticity of the reed causes the reed to vibrate back and forth, creating acoustic waves.

Reeds come in a variety of different strengths. The strength of the reed is determined by the thickness of the reed tip and the reed vamp. Another way of thinking about reed strength is reed resistance. A thinner reed tip will be a lower strength because the response is quick. A thicker reed tip will be a higher strength because there is more resistance against the air stream. Companies use two different labeling systems for reed strength. The first one is as follows: very soft, soft, soft-medium, medium, medium-hared, and hard. The second one is based on a number system. The number system begins at 1, the very soft strength, and increases by increments of .5. The reed strength will be shown on the front of a reed box, so it is easily visible to customers.

It is important to choose a reed strength that fits the clarinetist's skill level. The reed strength should not interfere with the clarinetist's ability to play to full potential. A reed that is too soft will sound excessively bright. The tone center will also be very unfocused. A reed that is too hard will sound airy and muffled. In some cases, certain notes won't be able to speak.

For beginner clarinetists, I recommend starting on the "soft"/2.5 strength reed. If the reed strength is too hard, there will be a lot of resistance against the clarinetist which can lead to a discouraged player. Once the clarinetist builds strong air support and embouchure muscles, they can begin experimenting with harder reed strengths. 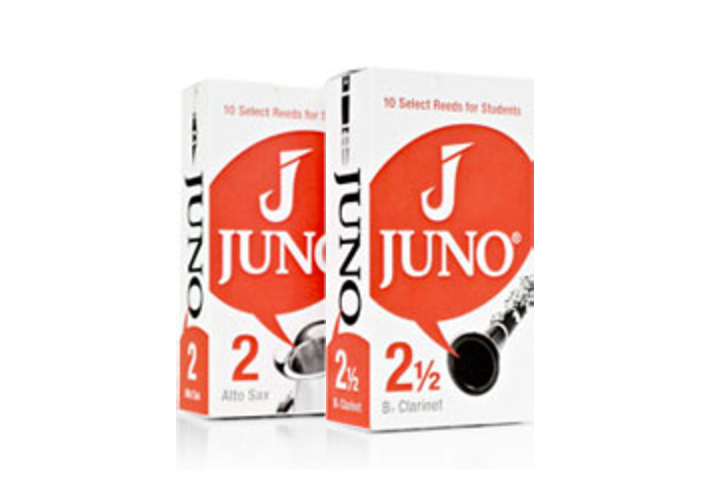 Specially designed to be extra responsive for beginning clarinet players. Great consistency and value for the money.
Buy on woodwind brasswind

It is important to remind clarinetists that reed strength does not determine the quality of musician you are!

Reeds are very delicate and fragile items that require a good care and maintenance system.

Buying or receiving a brand new box of reeds is very exciting, and you cannot wait to play on the reed! However, it is important to gradually break in the reed before playing on the reed for a full practice session. The first day of opening a new box of reeds is testing day. Test at least three new reeds. Only play on the reed for five minutes. While testing the reed, observe its qualities: how easy it vibrates, its responsiveness, level of resistance, and quality of tone. Increase the playing time each day. The ranking of the reeds may change the first couple of days due to the reeds reacting to the wetting/drying process. If the reed is not cooperating, try experimenting with reed placement on the mouthpiece. If the reed is too soft, move the reed slightly higher up on the mouthpiece. If the reed is too hard, move the reed slightly lower on the mouthpiece. Reeds are never perfectly balanced, so experimenting with moving the reed left or right may help as well.

As reeds are being used, the cane gradually breaks down. I recommend choosing to break in slightly harder reeds than what feels comfortable. These reeds will last longer.

The reed must be dampened before playing on it. Reeds are most commonly moistened through saliva. However, it is common for clarinetists to have a small container filled with water for their reeds. If the water container is your preferred method, remember to change the water before each playing time.

New reeds will come in a plastic container where the reed slides in and out. I recommend purchasing a clarinet reed case that is specifically made for maintaining the reeds. Key features to look for when purchasing a reed case are as follows: A flat, sturdy surface for the reeds to lay on to prevent warping, three or more slots to hold reeds, and a humidity controller or a place to put a humidity pack. 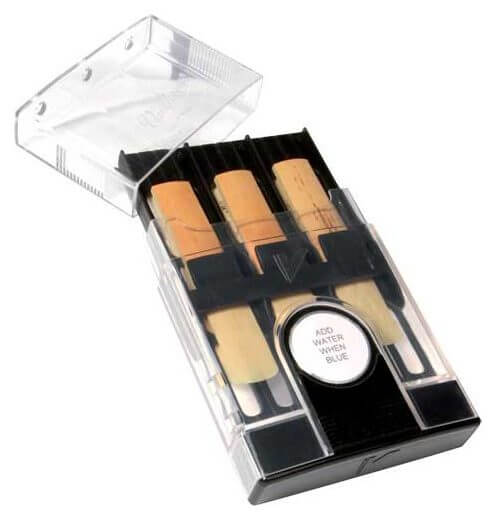 The Vandoren Hygro Reed Case has six numbered reed slots, grooved floors for even drying, and a humidity controller that changes color when more water needs to be added to the sponge. I love this reed case because it has all of the key features in one case at a reasonable price.
Buy on woodwind brasswind

I recommend keeping at least three functioning reeds in their reed case at all times. It is so easy to find your favorite reed and stick with only that reed for every rehearsal. However, make it a habit to rotate between at least three reeds. The weather, humidity, lifespan of the reed, and the building's acoustics are all factors in changing the response of the reed. One day, your favorite reed may not work due to those factors. Hence why it is important to keep three or more reeds that have been broken into in your reed case. Check out my article on other important clarinet accessories.

Listed below are common reed problems that occur in every clarinetist's journey, as well as possible solutions for the reed problems. Air support and embouchure are also big factors in these reed problems.

The reed is too soft or the reed is incorrectly placed on the mouthpiece.

The reed is either too soft or too hard, the reed is chipped or broken or the reed is placed incorrectly on the mouthpiece.

High notes are not speaking or are very flat

The reed is too soft or the reed is placed incorrectly on the mouthpiece.

Want to learn more? In the video below, Danielle Janos shares her clarinet reed tips and tricks. She covers breaking in reeds, reed care, working on reeds, and creating the first sounds on a new reed.

How To Play A Clarinet Glissando