As a musician, you have probably heard your band director tell you to practice your scales, but why? Practicing clarinet scales will enrich many aspects of your clarinet playing, as well as help you better understand music theory. Yes, it may seem boring to keep practicing the basics every day, but in the long run, it will help you become a better clarinetist.

As a beginning clarinetist, I would practice my scales every day because my private lesson teacher assigned them. However, I hated practicing scales. Like many beginning musicians, I thought of my scales as more of a chore rather than an exercise that would make me a better clarinetist.

Once my private lessons ended and I became unsupervised while practicing, I slowly drifted away from practicing my scales. At the time, it felt nice to not practice my scales but it hurt me in the long run.

I am a Bachelor of Music degree which means I had to do a bar exam at my sophomore year, spring semester jury. Of course, this bar exam was basically a scales test! I had to know all of the major and minor scales and play them with no mistakes in front of the woodwind faculty.

Since I had not been practicing my scales daily like a good student, I had to practice extra hard to re-learn all 24 major and minor scales. Much like sports, if you take a break, your body is quick to forget the specific movements and techniques necessary to perform well.

A scale is a sequence of notes that are arranged according to a whole step and half step pattern. A scale has eight notes in an octave. The major, minor and chromatic scales are important to know and memorize to understand the structure of music. These scales also benefit overall clarinet playing and performance.

To fix this, the clarinet has alternate keys that utilize the opposite hand but play the same note. Other alternate fingerings produce a better intonation for specific notes, especially those in the altissimo register. 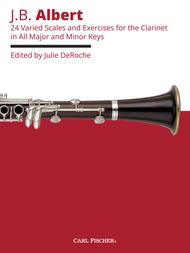 24 Varied Scales And Exercises For Clarinet

The Carl Fischer 24 Varied Scales and Exercises for Clarinet includes all 24 scales in original form and in variation. This scale methods book makes practicing scales interesting and fun for beginner and intermediate clarinetists. 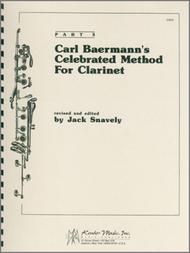 The Carl Bermann's method book for clarinet is the perfect resource for practicing scales. This method book includes scale, arpeggio, and chord patterns for every major and minor key. This scales book is a great resource for intermediate to advanced clarinetists.

The Benefits of Practicing Scales

For example, as a runner, you become better from warming up correctly and going for shorter runs to focus on form and breathing. If you only go for long runs every day, you are more prone to injuries and your body will become tired. Practicing scales is like going for a shorter run. Scales are the building blocks to becoming a good musician.

Scales should always be practiced with a metronome. When playing a scale, it should sound seamless and even. Begin practicing your scales at a slow tempo. My piano professor in college would always say, "speed is your enemy".

Practicing a scale at a tempo that is too fast will cause your fingers to mess up, the scale will sound rushed and uneven, and you will become frustrated. Practicing scales at a slow tempo allows you to focus on where your fingers are going next. A slow tempo will also help you listen to each note's intonation.

Another benefit of practicing scales at a slow tempo is being able to feel the sensation of each note. In music, each note either pushes forward or settles back. The same sensations are present in scales.

Playing the scale at a slower tempo will allow you to decipher which notes push forward and which ones pull back. For example, in a C major scale, the climax of the scale is the second octave C. The leading tone of the scale is B, the note right before the climax.

Another exercise that will help you with understanding sensations is playing the scale, but only on one note. For example, I would "play" a C major scale, but only play a C for each note.

The purpose of this exercise is to play the note with a different sensation. To keep track of which note of the scale I was on, I would sing each solfege pitch in my head.

This exercise eliminates fingerings, allowing you to focus solely on the sensations of the notes. You can use this exercise with repertoire as well. It is very helpful when trying to understand the sensation of music because you don't have to focus on fingerings.

Once you have the fingerings and sensations down, you can start to slowly increase the tempo on your metronome. However, if you play a scale at a faster tempo and your fingers start to fumble or you can no longer hear the sensation, stop at that tempo and work finger coordination and sensation until you can play it correctly. Do not go faster than you can play beautifully and correctly.

For lyrical and slow pieces, it is important to practice at a slow tempo to understand the sensation of the notes, how the notes fit into the chords, and to check intonation.

Practicing scales will improve clarinet intonation. As always, practice scales with a tuner on the stand. Practicing clarinet scales as long tones will help improve intonation.

Clarinet long tones is another exercise that is important to incorporate into your daily practice routine. Clarinet long tones target a wide range of basic skills that are essential for improving your clarinet playing. Long tones focus on posture, air support, the oral cavity, the embouchure, intonation, and the color of the sound.

All of these aspects should be focused on while playing scales as well. Playing each note of the scale as a long tone will help you pinpoint the pitch tendency of that note. We often forget that scales are a form of music too. Scales should be in tune and played beautifully.

First, choose a scale to practice. Second, set your metronome at a slow to moderate tempo. I usually start at quarter note at 60. From there, play each note of the scale for four beats, ascending and descending. While you are playing, make sure you are adjusting the pitches that are out of tune.

Finger coordination and dexterity are essential skills to have as a musician, especially as a clarinetist. For brass players, there are only three or four valves that they have to focus on. Most of their sound comes from their embouchure and aperture.

However, for woodwind instruments like the clarinet, there are a total of seven tone holes to cover with our fingers. Furthermore, there are multiple keys that our fingers, mostly pinkies, depress to play many notes. As a beginner, it can take a while to teach your fingers how to navigate the clarinet.

Even as an advanced clarinetist, I still need to practice my finger coordination, especially for technical passages or after I haven't practiced in a while. The design of newer clarinets, such as buffet clarinets offers a more comfortable hand position, as well as an adjustable thumb rest to provide more comfort while playing.

Knowing all 24 major and minor scales will significantly improve your sight-reading skills. Music is based on a series of scale patterns. During the time that is given to analyze the music, it will be easier to find scale patterns within the music based on the accidentals and the key signatures.

Scales are the foundation of jazz music and improvisation. For jazz, the scales don't stop at major and minor scales. Jazz scales include the church modes: Ionian, Dorian, Phrygian, Lydian, Mixolydian, Aeolian, and Locrian.

Simply put, each mode is in the same key signature as the original scale, but each scale starts on a different note of the scale (scale degree). For example, the original key of a scale is C major.

A Dorian C major scale would be a C major scale, but starting on the second note which is D. Knowing and memorizing all of these scales will provide a solid foundation for improvisation.

Adding articulation to scales practice not only spices things up but it also significantly improves your articulation. During a saxophone studio, one of my upperclassmen friends shared his practice strategies for scales and articulation.

First, he picks a few different scales; a mix of major scales, minor scales, and scales in different modes. Second, he writes down different articulation combinations. These combinations can include slur two tongue two, slur three tongue one, all slurred while ascending and all tongued while descending.

Lastly, he chooses a scale to play and then plays every articulation combination. Combining scale and articulation practice will keep practicing more fun and interesting, as well as improve both skills.

The famous MLB All-Star Barry Larkin once said, "What people don't realize is that professionals are sensational because of the fundamentals".

If I could go back to my early years of playing clarinet and tell myself one thing, it would be to practice my clarinet scales diligently every day, even if I didn't want to.

Practice your clarinet scales every day with a positive mindset. Practice slow, stay focused, stay motivated, and don't give up.

Tips and Tricks for the Clarinet Chromatic Scale

Forming And Strengthening The Clarinet Embouchure