One of the much less common instruments of the trumpet family is the contrabass trumpet. There are very few musical scores that call for the use of a contrabass trumpet; as you can guess by it's size, very few were ever manufactured as the size alone makes the instrument unwieldy for just about any musical performance.

Despite technically being referred to as a trumpet, the instrument is much more akin to the tuba. It is typically pitched two full octaves below a normal Bb trumpet, and has the same range (relatively) as a standard trumpet.

So why is the contrabass trumpet even considered a trumpet? And why is it so large?

Therefore a contrabass trumpet which is two octaves lower than your normal Bb trumpet is going to need four times the length of tubing. As you can imagine, a trumpet four times as large as an average trumpet is pretty huge!

Now if we were to take a practical approach to designing a contrabass trumpet, we would simply wrap the tubes in a much tighter fashion. This is basically what a tuba does, and the very few commercially available contrabass trumpets are designed this way.

The gentleman performing this contrabass tuba is Don Butterfield, a well-respected jazz and classical tubist known for his recording session work. Because the instrument is so large and low in pitch, it wouldn't make sense to use a small trumpet mouthpiece to push air throughout the instrument.

Since a tuba also sits two octaves below a trumpet, and the mouthpiece used on a contrabass trumpet is usually a tuba mouthpiece (or similar), it makes more sense that a tuba player perform on the instrument.

Another reason that the contrabass trumpet is considered a member of the trumpet family is because the bore of the instrument is cylindrical rather than conical. Trumpets and trombones are cylindrical brass instruments, while horn, euphonium, and tuba are conical.

However, when you take a cylindrical bore trumpet, but pitch it down two octaves lower than normal, the sound can become unstable. It becomes much more difficult to articulate clearly.

In addition to the Bb version of the contrabass trumpet, there have been versions in Eb and F as well. Famed tubist Roger Bobo wanted a period piece to match the homogeneous sound of trumpets for Gabrielli and Pezel works as he performed with the Los Angeles Brass Quintet. As a result, he had a instrument commissioned that combined the parts of trombones and horns to form a contrabass trumpet in F.

Instruments such as these, while still rare, are more common than the Bb contrabass instruments. Roger Bob's custom horn served as the inspiration for this model manufactured by the Swedish company Lars Gerdt AB. As you can see, the there are additional slides to accommodate the larger length in tubing, but an overall smaller bore when compared with the Bb contrabass trumpet in the video above. 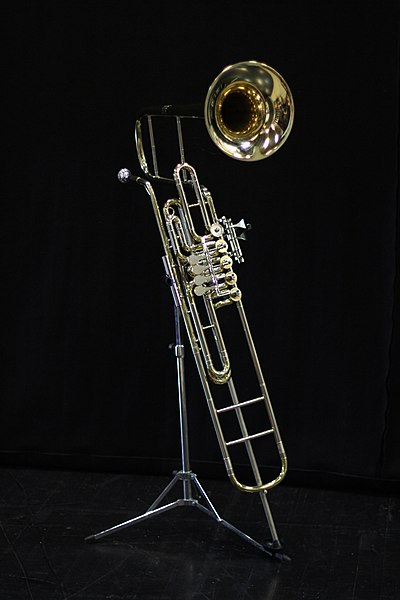 Another more practical option is the cimbasso. The cimbasso is an Italian-made contrabass trombone pitched in the key of F or Bb, and unlike the slide trombone, has the addition of valves. Since the cimbasso is also cylindrical like the trumpet, has valves like a trumpet, and is pitched like a contrabass trumpet, this would usually be the ideal replacement.

What Does It Look And Sound Like?Alternatives to Bb Contrabass Trumpet