On brass instruments, we're used to articulating using our tongue to make tu or du sounds.

Try slowing this motion down, and you can feel that the tu sound is formed by the tip or front of your tongue striking against the roof of your mouth behind your top set of teeth.

Now when I say "strike," it's important to keep in mind that this is a bit of a misnomer. What we're actually doing is releasing air. The air stream should continue, and our tongue merely interrupts it in order to cause the articulation.

When we desire to articulate at faster speeds or with smaller rhythmic subdivisions, it can become difficult for us to simply increase the rate at which we tongue. Certainly one can practice and make improvements to the speed of their single tonguing, but at some point, you hit a limit where your tongue can't keep up with what the music and your brain require of you.

At this point, we need to re-conceptualize how we can articulate, using different parts of the tongue and mouth.

Whereas tu (or ta) is performed with the front of our tongue, we can use ku (or ka) to engage the back of our tongue near our throat.

We rarely use the ku sound in isolation, unlike tu, which is our default articulation sound for every day tonguing.

The problem however, is that the ku feels much less natural to us since we don't use it as regularly as the tu sound.

I draw the comparison to beginning percussionists. With the exception of a few students who are ambidextrous, we each have a dominant hand.

If you've been used to writing, brushing your teeth, throwing a ball, and opening doors with a single hand for years of your life, trying to do all of these activities with the opposite hand feels very strange and often ineffective.

The same can be said for double tonguing.

Since double tonguing tends to be a more advanced concept in trumpet playing, chances are you've already been playing the trumpet for a couple of years before you approach this topic.

Because of this, we need to retrain our tongues, but more importantly our brains, to be equally effective on our kus as our tus.

But as I mentioned before, you're already so much more experienced with the tu syllable. So I would typically start by working on the ku syllable in isolation on a single pitch.

When I was a young player, it didn't feel like it all "clicked" for me until I was playing actual musical passages and exercises.

I equate this to when you're in math class and you're young, you may ask the teacher "Why do we have to learn this? When are we going to use it in the real world?"

While it's good to break down concepts into their smallest parts to help us learn more efficiently, it's hard to see the forest through the trees.

I recommend putting double tonguing into action, and there are a couple of great resources to get started: 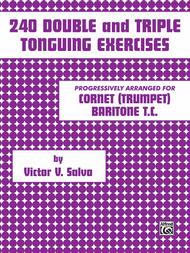 Victor Salvo's 240 Double and Triple Tonguing Exercises is a very practical approach to begin multiple tonguing. While the resource is created specifically for trumpet double tonguing, it can be transposed and used by other brass players as well.

And with 240 exercises worth of content, this can be consumed over time, sprinkled in with other etudes, warm-ups and exercises over the course of a couple years. There is no need to perform all 240 exercises back-to-back in order to become proficient at double tonguing.

And not to be out-done by their brass counterparts, flutists get a bonus three whole exercises for 243 Double and Triple Tonguing Exercises.

Many of you are familiar with the Sigmund Hering's Etude books. He was a prolific teacher, with over 20 different method & exercise books released, including one specifically devoted to multiple tonguing. 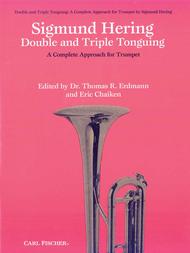 Double And Triple Tonguing A Complete Approach for Trumpet. Composed by Sigmund Hering. Edited by Dr. Thomas R. Erdmann. SWS. Sigmund Hering (18991986) is the most prolifically published trumpet pedagogue of the twentieth century. During his career as trumpeter with the Philadelphia Orchestra, he composed over twenty etude books and method books for trumpet and trumpet solos. Hi. Classical. Softcover. With Standard notation. 40 pages. Carl Fischer Music #WF26. Published by Carl Fischer Music (CF.WF26).
Buy on sheet music plus

And of course, the beloved Arban's book can always be a great option to take from the existing exercises and practice different tonguing syllable combinations on them.

The Ku Gets Stuck

Some times it can feel like the second syllable gets stuck in your throat. Unfortunately there's no easy button to fix double tonguing issues like this. It usually comes down to practicing different syllables; you may even want to throw in a tee kee for good measure. Slow the tempo way down. Practice on just the second syllable on your other exercises to strengthen its sound in comparison to the primary syllable.

Also, remember that it takes coordination of the tongue and fingers as well. You may feel comfortable making the rapid tu-ku sound without an instrument, or on a single pitch, but you find as you play melodic passages that your articulation pattern feels something akin to tripping down the stairs. That's why scales can help provide that extra layer of coordination. Chances are, you have your major scales memorized like the back of your hand, therefore it should be easier to align the finger movements with the articulation.

I Can Say It But Not Play It

I'm sure many of us remember fondly walking down the hallways of our high schools practicing our tu-ku-tu-kus, cool trumpet players that we were.

And while I have nothing specifically against practicing double tonguing articulations, I happen to think this is one of those areas where it is beneficial to practice with the mouthpiece and horn itself because the intended effect does not seem identical without the instrument.

For example, when you "sing" the double tonguing articulation patterns, often times your oral cavity is larger compared to when you are playing it on your instrument. That means that your tongue may be responding differently with varying amounts of space to utilize.