There are many diagrams of the flute range out in the world, all answering the question, what is the range of the flute? Below I discuss these particular variations, in order to provide some context behind the seemingly different answers to this question while expanding further upon the topic of flute range. 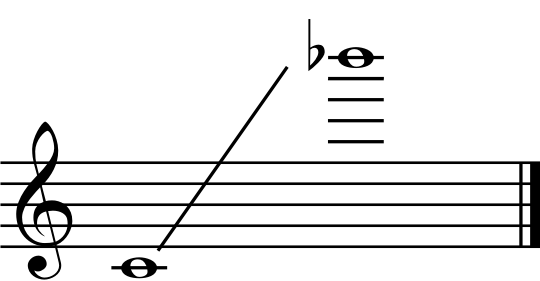 On the Low End

The low end of the flute when played traditionally is bound by the equipment that the flutist is using.

A flute consists of three parts, the headjoint, the body, and the footjoint. The body is rarely, if ever, altered in a way that would cause the range to be adjusted.

Student model flutes typically have a foot joint that can play down to C4, which is why many flute range charts have C4 as the lowest note. Some professionals will Once you move into intermediate and above model flutes, it is more common to have a foot joint that adds one additional note, going down to B3, essentially expanding the lower range one additional half step. (It is worth noting that some professional flutists will have both a B and a C footjoint for their instrument as it can alter the tone color slightly.)

Another way that the range can be affected is with the headjoint. A relatively recent invention, the glissando headjoint, can be used to extend the range an additional whole step, down to A3.

You might be thinking, that must be as low as the flute can go. It would be easy to answer that statement with a simple yes or no, as a flute with a glissando headjoint and a B foot joint cannot play any notes lower than an A3... traditionally.

However, with some extended techniques, the flute can actually produce pitches as low as C3 through tongue stops (aka tongue rams or tongue thrusts). These pitches are very percussive in nature and cannot be sustained. But it is possible and does help to complicate the flute range questions.

On the High End

What is Commonly Taught

When I was a band student, the highest note I was ever instructed to play was a Bb6, and you will still see this as the upper limit of the flute in some band texts, as well as some orchestration guides.

However, it is very common for a flutist to be proficient at playing notes up to C7, as many intermediate students and beyond will commonly drill three octave C scales in their warm up and technical exercises. It is not uncommon to see composers write for this range in orchestral literature over the last couple hundred years.

As the years pass, flutist are becoming more and more proficient with the instrument at a younger age, which in turn accelerates the development and expansion of the instruments capabilities.

Collegiate level performers are expected to have fluency up to a D7, which adds another whole step on to the overall range of the instrument.

But wait... there's more! Flutists all over the world are exploring this elusive "fourth octave" of the flute. Most of these notes require a massive amount of air support and control, and as such are not easily obtained.

However, there are commonly accepted fingerings and academic papers on playing notes up to F#7, and even G and G7 are coming into the fold. Some have even found success playing C8.

What is the range of the flute? The common practice use of the flute is B3 to C7. But beyond this is a world of tone colors and possibilities, stretching down to C3 and all the way up to G7 and beyond (C8?).

Composers looking to explore the vastness of flute capabilities in range and tone can study these different extreme ranges to get some really interesting compositional ideas.

Players looking to be the best that they can be should practice these different extremities, to be prepared for whatever might be coming around the corner.

The interested reader hopefully has learned that sometimes a simple question has a very complicated answer, but perhaps you found something new and interesting along the way.

Photo by ACE Foundation |CC BY