The pit orchestra is a term used to describe any ensemble that accompanies a live theatrical performance. When people use the term pit orchestra today, they are typically referring to the instruments that play along with a Broadway-style musical theater performance.

In this article, we will discuss many aspects of the pit orchestra, including its home in the orchestra pit, pit orchestra instrumentation, and touch on topics such as a Broadway pit orchestra salary and more and we dive into the pit.

What Is A Pit Orchestra?

As briefly mentioned, a pit orchestra is an instrumental ensemble that accompanies theatrical performances. This could be anything from an opera, a ballet, or musical theater.

Unlike many ensembles, the term pit orchestra refers to an ensemble's function, not its configuration. If you were to talk about a symphony orchestra, a wind ensemble, or a marching band, you would have a good sense of what instruments would be included. However, pit orchestras come in all shapes and sizes, with all sorts of musical instruments.

The name “pit orchestra” comes from the typical location that these ensembles perform in during a show: the orchestra pit.

The orchestra pit can be designated anywhere in the theater. However, traditionally, the orchestra pit is in front of the stage and recessed below the stage so that the audience’s view is not impeded by the musicians, but that the conductor, when standing, can communicate to the performers on stage.

Most major theater halls that host Broadway-style shows have an orchestra pit built into their stages. This photo shows a typical pit below a theatrical stage. 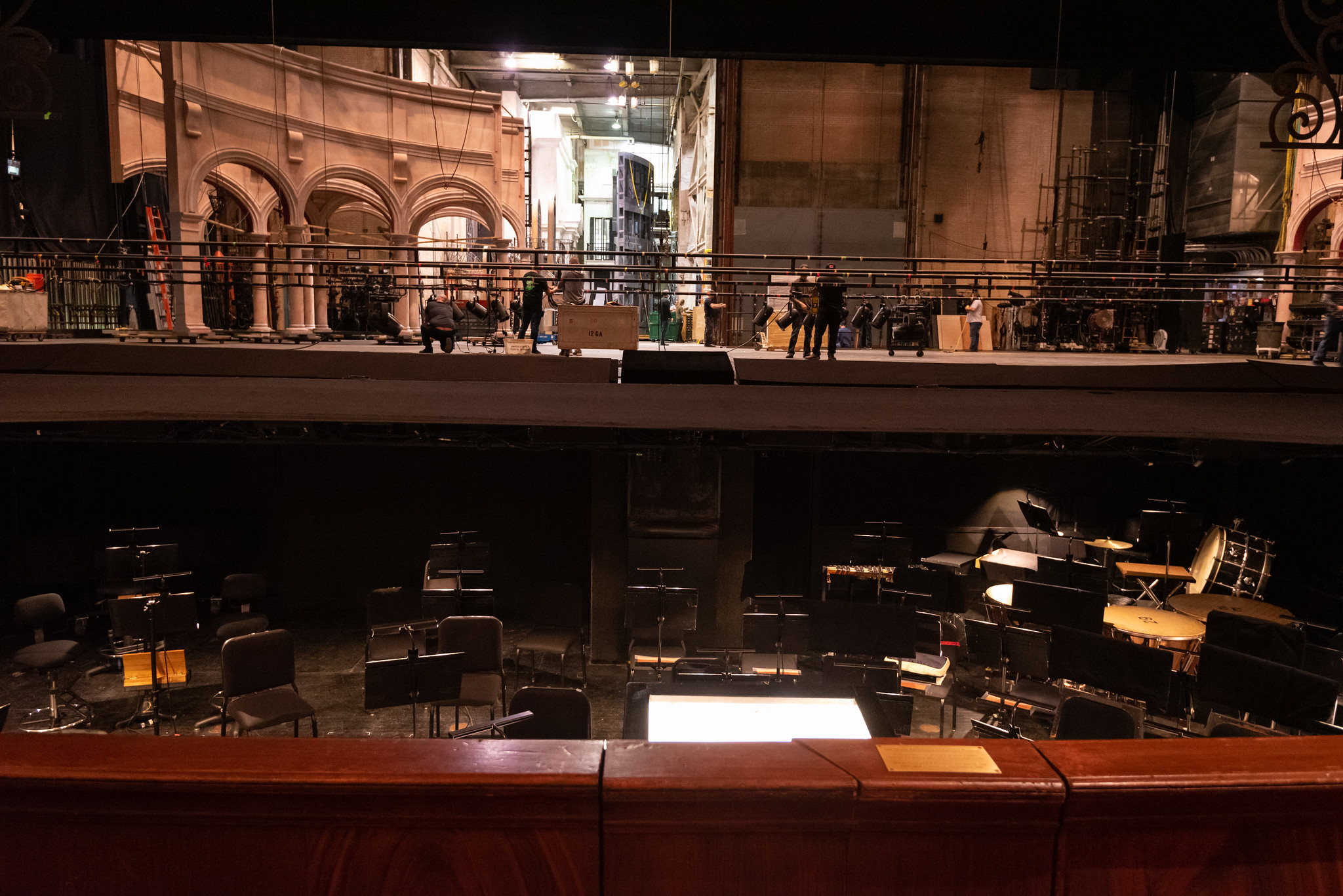 That all being said, the advent of technology or the restraints of a theater (or both) can have an impact on the location of “the pit.” I personally music directed many musical theater performances where the orchestra performs off the side of the stage, built into the set of the stage, backstage, and even on a catwalk over the stage!

Even in professional theater, increased reliability of close circuit broadcasts allows for the conductor to be seen by the performers on stage when the ensemble is in another location entirely. In some extreme cases, if the ensemble is utilizing microphones or is entirely made of electric instruments, the pit could be in an entirely different room and, with the use of technology, pipped into the theater.

Instruments in a Pit Orchestra

This is where things get fun. Pit orchestras have no standard instrumentation. It is all on the whim of the composer, music director, orchestrator, and director. Also, in many cases, the operating budget will come into play in determining how many musicians they can afford to hire.

However, this is very atypical when it comes to musical theater pit orchestras. In the Broadway scene, many factors have to be considered, including space in the pit, creative needs of the show, and how many musicians the production can afford to hire.

This has lead to some practices which are prevalent in modern pit orchestras. First off, many pits will have two or three keyboards, which are used to sample various instruments. These keyboards can take the place of pianos, chimes, harp, celesti, or used to support strings, and even provide new-age sounds that are electronic in nature. Also, it is very common for the conductor of ensembles to be playing one of these keyboard parts.

Also, it is very common for any woodwinds parts to be grouped into a “Reed” part. For example, Reed 1 may be required to play flute and clarinet, while Reed 4 may be piccolo and saxophone. This means that woodwind players who can play multiple instruments with a high degree of proficiency are much more likely to land positions with pit orchestras.

Modern “Rock and Roll” style shows like Godspell employ only a keyboard, bass, drums and guitars. There is also the minimalist approach such as A New Brain which uses a piano, synth, drums, reed (covering all woodwind instruments), horn, and cello. Watch the following video and see how the keyboard player is actually directing the rest of the pit! Also notice how they are sitting off to the side of the stage, not actually in the orchestra pit.

The Real World of Pit Orchestras

So how does one get a gig with a pit orchestra, and what is a Broadway pit orchestra salary? Well, for starters, the more classical style performances (opera and ballet) will utilize their local orchestra, or they will hire an orchestra through an audition process.

The truth of the matter is that Broadway pit orchestra jobs are extremely difficult to come by. It is very unusual for there to be any sort of pit orchestra audition, which is the standard model for hiring for professional orchestras around the world.

Performing in a Broadway pit orchestra is mostly about being part of the musical community in an area, and being a musician that people want to hire. In some cases, it could be a job you land through your local musicians' union. In other cases, you might know someone who knows someone. Putting yourself out there as a talented player who is willing to work will help make the right connections that could land you in the pit of a Broadway orchestra.

The pay for a pit orchestra musician on Broadway is largely set by the musicians union and is a fixed rate. In 2018, it was $1885.77 per week, with those playing multiple instruments receiving an increase ($235.72 for the second instrument and another $117.86 for each instrument thereafter).

That being said, New York rates are going to be much higher than other parts of the country, and if you are hired to play with a touring production coming to your local theater, expect to be paid a per-service rate, or a flat rate for the run. This could be dictated by your local musicians' union.

The pit orchestra is quite an interesting beast. Everything about it goes against the norms and traditions of classical instrumental ensembles, yet it is a vital part of live theater that should be nourished. Far too often there is a tendency to use pre-recorded tracks for low-budget productions, but there is nothing like a live ensemble accompanying a performance.

Next time you see a performance, take a note of the pit orchestra, its location, the instruments involved, technology used, and appreciate the level of care that goes into ensuring that the musical elements of the production support the overall look, feel, and story of the show.