Chances are, you're a jazzer or are upping your chops come marching band/drum corps season and want to up your high chops game. Of course, first and foremost, you'll want to focus on your embouchure and air stream. But a good screamer trumpet mouthpiece in your arsenal is going to help get the job done easier and faster than just technique alone.

Now there are a couple of schools of thought when it comes to high trumpet range playing. One is that using a shallow cup mouthpiece is somehow "cheating," and that every trumpet player should use a single mouthpiece and focus more on the practice room than finding a perfect mouthpiece to fix a problem like range.

The other is that you use the right tool for the job.

I tend to subscribe to the second philosophy. There are certainly merits of the former; I completely agree that one shouldn't rely on some super special mouthpiece to bestow super powers. That can only come from time spent in the practice room.

However, if the goal is to play high, then use the tool that helps more efficiently play in the upper range of the instrument. Just keep in mind that the right tool for screaming on a trumpet is not the same tool for playing in a symphonic setting or a chamber ensemble.

The Mouthpiece Won't Fix Everything

Before we dig into the models of trumpet mouthpieces, I always put a disclaimer on what I am about to say.

I know far too many musicians that get hung up on the quality of their gear. And it's not an issue isolated to music alone. Have you ever seen all of the "photographers" out there with the latest and greatest DSLR or mirrorless camera? They've got the cash for the equipment, but they don't even take full advantage of all of the features that it offers simply because they haven't mastered the fundamentals of photography.

This is the same when it comes to professional versus intermediate and beginner models of horns. Can a beginner start on a higher grade of horn? Absolutely. But until they master the fundamentals of tone quality, a fancy horn isn't going to give them some huge leg up. Alternatively, give a professional a student-level horn, and they'll still make some incredible sounds.

When it comes to screamer mouthpieces, think about it the same way. If you've got a high range, or are working on extending your range, a good mouthpiece is going to help your endurance by requiring less effort, and help with projection issues. It won't magically give you an extra x amount of notes of range.

In fact, be wary of manufacturers who market a specific mouthpiece as being able to extend your range by so many notes.

With that out of the way, let's first take a look at the characteristics of what makes a good trumpet screamer mouthpiece.

There are typically four characteristics that we consider when it comes to mouthpiece selection:

When it comes to selecting a mouthpiece for range efficiency, most trumpet players would agree that the top two characteristics to consider are the diameter of the cup as well as the cup volume.

Now of course, you'll have to bear in mind any personal needs based on the size and shape of your lips, but personalization aside, you'll want to play on a mouthpiece with the smallest diameter that still feels comfortable to you.

And a shallower cup is going to be what helps you the most with endurance. It's certainly possible to play with a deeper cup, but it's going to feel easier and more comfortable to play for an extended time in the upper range with better projection.

The Kelly brand has been in the space for a while, known for their fun colored Lexan mouthpieces. In addition to the fun marketing and branding (think matching school colors), the mouthpieces are especially popular due to their ability to maintain an even temperature, whereas traditional metal mouthpieces can feel deadly cold when you're on the marching band field in the late fall and early winter.

The Kelly screamer lexan mouthpiece compares to a 13A4A, but one of the nice features is its more cushioned rim. This is perhaps the most distinguishing feature in that it feels comfortable to play. Compared to other lines, it's one that many trumpet players report to feel just right when they're playing.

If this is your first foray into the world of Kelly mouthpieces, don't be offput by their colored mouthpieces or the fact that it's made of plastic. These mouthpieces sound great, and have major names like Bobby Shew playing on them as their primary mouthpiece.

And, on top of the comfort and quality, it's at a price that you won't be able to beat elsewhere. Are plastic mouthpieces the way of the future? Time will tell, but your pocketbook and embouchure will both thank you later for giving one of these puppies a try.

Another great choice is the Schilke 13A4A or 14A4A. While the cup is reportedly a little shallow for every day playing, it shines in the upper register. 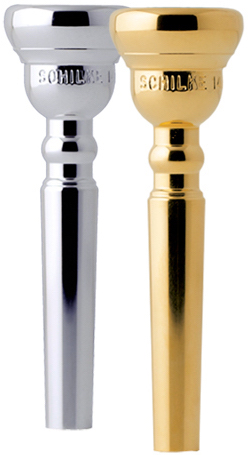 The 14A4A has a uniquely bright, edgy sound that really helps with endurance. Think rock band trumpet players playing multiple sets on a single night. It's a specialty mouthpiece with a special purpose!
Buy on woodwind brasswind

Overall word of advice to young players. New equipment, be it a horn or a mouthpiece isn't going to provide a cheat code to automatically improve your range. It can be easy to fall into the trap of thinking we're just missing out on some secret that will open the door to screaming on some jazz charts.

That being said, you want equipment that can support, rather than inhibit, the development of your range. If you're looking to increase your range in a band or orchestral setting, I would stick to my main mouthpiece. If you want to play lead in jazz or wail out on the marching field, either the Kelly or Schilke are great choices to check out.