Although the word mute often implies silencing (think muting your television), trumpet mutes are designed to change the color or timbre of the instrument. Mutes certainly do affect the volume of the trumpet and can also affect intonation, but usually it's intended by the composer to create a different tonal texture or blend with other instruments.

While some instruments only offer a couple of different mute options, trumpets have long been the instrument with the greatest variety of mute choices. This is partly due to the popularity of the trumpet itself, the cylindrical bore and brighter sound of the trumpet that lends itself to not getting too muddy with the addition of mutes, and the size of the instrument.

Inserting a mute into the trumpet

Most mutes are used by inserting the mute itself into the bell of the trumpet. Regardless of the material of the mute (metal, wood, rubber), the majority of mutes have corks glued onto the sides of the mute which help position and hold the mute in place when it is inserted into the trumpet. Some mutes, like the plunger mute and various hat mutes fit around or over the bell, rather than being pushed into it.

It can be helpful to use a little moisture to get the cork to stick better in the bell. This can be achieved by blowing warm air (try exhaling the syllable "ha" at the back of your hand to feel warm air) in the bell and then inserting the mute into the trumpet with a gentle twist. 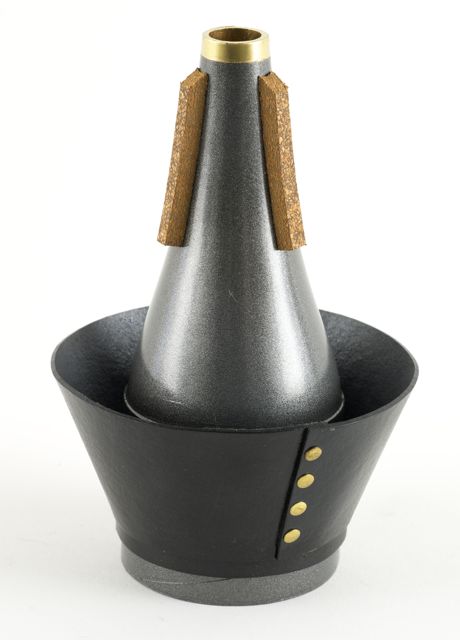 The cup mute looks similar to the conical shape of the straight mute, but with an added cup at the bottom of the mute. A cup mute has a more muffled sound, and it often has an adjustable function to move the cup closer to or further away from the bell.

Adjusting the cup closer to the mute will make the volume softer; the typical distance from the bell is around a quarter of an inch. For cup mutes that are not adjustable, one can achieve the desired length by sanding down the corks, although this is a permanent adjustment. 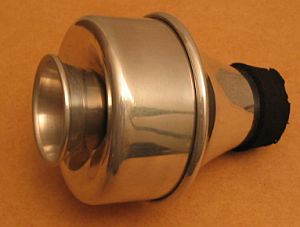 The harmon mute is almost always made out of metal (aluminum). Unlike the other two mutes we have discussed, the harmon mute is made up of two separate components, the mute itself and the stem which can be inserted into the hole in the center of the mute that sticks out from the bell.

In addition to the stem position, one can create a "wah-wah" effect by holding their left hand over the stem of the mute and opening up the hand to change the volume of sound that is being released.

This mute is also called a "wah-wah" mute which is probably more appropriate, as Harmon is the brand name. Similar to calling it "Kleenex" instead of facial tissue.

A wah-wah effect can also be achieved by using a plunger. The plunger is just a standard sink plunger you can purchase from Menard's or other home projects store, there is nothing that makes it special or unique for trumpet performance, save that you remove the stick so there is a hole in the center of the rubber. You can hold the small opening on the backside of the mute between your middle finger and ring finger of your left hand to be able to easily open and shut it against the bell of the trumpet.

Like the plunger mute, the bucket mute is not intended to be inserted inside of the trumpet. Instead, it has three clips on the outside of the cardboard cylinder that allow the clips to be attached to the outside of the bell and support the weight of the bucket. The bucket typically is filled with cotton or a similar fiber substance that helps create a muffled effect.

A practice mute is similar in appearance to a straight mute, is made of a harder material like plastic, and creates a tighter seal that brings the volume down to much lower levels. This mute is not typically intended for performance purposes, but rather to be able to practice independently in a quieter space. It is important to note that this does not entirely mute the trumpet (others can still hear you when they are nearby) but it does substantially lower the volume.

Other tips for using trumpet mutes

Mutes generally affect the pitch of your trumpet. It's better to have a mute that overall makes the trumpet flat than have a generally balanced intonation with some individually funky notes. The reason for this is that you can more easily adjust the tuning of your trumpet to accommodate an overall pitch change with your main tuning slide. If individual notes are affected, you have to be more cognizant of each note's pitch tendencies. For a deeper dive into intonation adjustments, see our guide on how to tune a trumpet.

Which are the most important trumpet mutes?

For students who are purchasing mutes for the first time, if you can only purchase one mute, get a straight mute. If you can purchase two, add on a cup mute. And if you can do three, tack on a harmon mute. Each school is different, but you may find that your band director also has a set of mutes lying around. When I taught high school band, each trumpet player was responsible for purchasing a straight and a cup mute, but we had a set of harmon mutes available to borrow, given that they were more common in jazz than concert band repertoire.

How do I know when to use a mute?

Composers have different notation to tell the player when to use a mute. In concert band/orchestral/solo repertoire, you may see the Italian marking "con sordino" or "con sord." This means "with mute." In jazz, it's common just to use the English words to tell you which mute to use: cup mute, straight, etc. There also might be specific directions about when to take the mute out, or when it should be played in open (O) and closed position (+) when using a plunger mute or wah-wah.

How long should my mute last?

The good news is that similar to the trumpet itself, mutes hold their playing quality and value quite well over many years. I still have my dad's trumpet mutes from the 1970s, and they work just as good as when he purchased them. The main issue you may experience over time is that the glue that holds the corks in place may become dried and weakened or the corks themselves might get worn out or stripped off the mute. If that's the case, corks are super cheap and you can glue new ones on yourself for a quick little DIY project.

Photo by Shunichi kouroki | CC BY