Trumpet pedal tones: the secret key to unlocking a high range? Or are they the destroyer of a solid trumpet embouchure? It's strange to think that such a relatively simple concept in the world of trumpet is so hotly contested, but you'll find that there are big names on both sides of the argument.

First off, let's get a better understanding of what we mean by pedal tones on the trumpet, because it differs slightly from other brass instruments.

The lowest standard pitch we can play on the trumpet is the F# below low C. The notes from F on down to C# below that don't have any actual fingerings we can use to produce the pitches, so it becomes up to the trumpet player to bend the pitches as close to the actual note as possible. It can be confusing because many people refer to these "false" tones as pedal tones, but the true pedal tones don't really start until you get to the C an octave below our standard low C.

The argument against pedal tones

In fact, if you watch videos of trumpet players practicing pedal tones and then moving throughout the range of the instrument, they actually need to readjust and slide their lips into a separate playing position. By doing this, it can be extremely detrimental to your normal playing.

Other pedal tone techniques encourage players to roll their lips out, with the inner lower lip enveloping part of the rim of the mouthpiece. This requires an even greater readjustment to reassume normal playing position.

Many trumpet players also adjust their embouchure by dropping their jaw in order to accommodate a larger oral cavity for a deeper sound in the lower register. Unfortunately, such an adjustment can also be responsible for shifting the positioning of the mouthpiece.

Do you see the theme in all of this?

Are there trumpet players who can seamlessly move between pedal tones and the rest of their trumpet range? Absolutely. And for them, pedal tones probably are a helpful tool in their practice arsenal.

But many, if not most, trumpet players will contort themselves in an acrobatic fashion to be able to play louder and deeper sounding pedal tones all for something that is rarely called for in repertoire and might negatively affect the rest of their playing?

The argument for pedal tones

Some of you may have read this far and thought, Case closed! Pedal tones just simply aren't for me.

But there are equally strong advocates and pedagogues in favor of the benefits that pedal tones can provide.

Pedal tones help establish control in our playing. On trumpet player I heard compared it to cross-training as an athlete. Though the performance of pedal tones isn't something that we use in our regular repertoire, being able to exert control and focus in the extremities of the trumpet range help our flexibility throughout the rest of the instrument.

Two other primary consideration when it comes to utilizing pedal tones: they help relax your embouchure during long tone warm-ups, and it can be helpful in extending our range.

When it comes to range, think of it like a skyscraper. You can't start building the uppermost floors of the skyscraper and the cool pointy thing on top without first having a solid foundation. Likewise, when it comes to range building, you can't expect to soar to the stratosphere without having a solid foundation in the low, fundamental range of the trumpet.

One of the strongest voices advocating for pedal tones comes from renowned Claude Gordon, who documents the approach in his systematic approach: 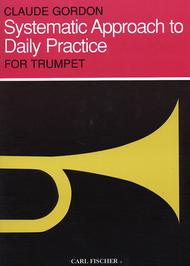 Systematic Approach To Daily Practice For Trumpet - A Fifty-Two Week Trumpet Course Designed to Develop A Register from the Second C Below Low C to C Above High C, Along with the Power, Endurance, Sound and Control Necessary to Meet the Demands Required of the Professional Trumpet Player.. Composed by Claude Gordon. Perfect-A Hinge. Back To School. Instructional. Instructional book. With introductory text, instructional text and performance notes. 128 pages. Carl Fischer Music #O4702. Published by Carl Fischer Music (CF.O4702).
Buy on sheet music plus

Much of the technique needed to produce pedal tones depends on the ability to bend pitch. To practice this, I think it makes sense to start in a "feel good" range of the trumpet, rather than starting with our lowest notes possible.

Starting on a low C (not pedal C, just plain ol' low C), slur down to the B one half step below, using the appropriate second valve. Listen carefully to the intonation of the pitch.

Now in the next step, you're going to do the same thing, slurring from C to B, however, rather than using your valve to lock the note in place, keep the valves open, using only your embouchure and air adjustment to play the B. Feels and sounds kind of weird, right?

It can also be helpful to practice this in fourths, to be able to get a more solid feeling of descending movement. It can be tricky going from F to E in our false tones, so it would make more sense to descend Bb -> F and A -> E to keep the same finger combinations in check.

Once you have spent time practicing the false tones all the way down to F# -> C#, the low C, which is our first true pedal tone, should more clearly pop out than the false tones. That's because this is a true harmonic, rather than these false tones where we have been entirely resonant on our embouchure to do the hard work.