Sure, you've probably heard of the different instrument families within the band or orchestra. Woodwinds, strings, brass.

And within the brass family, you're probably aware of the core instruments: trumpet, horn, trombone, euphonium, and tuba.

But did you know there are a number of different types of trumpets just within the trumpet family alone?

In this article we'll explore the different timbres and when you would want to use each one of these instruments.

We'll focus on trumpets that are in common use today. While there are a number of color instruments used in historical ensembles, we'll cover that in our other article on the history of the trumpet.

The most common trumpet today is undoubtedly the Bb trumpet, which is used by school band, orchestra, and jazz players, beginners and professionals alike. A Bb trumpet has a cylindrical bore, which is characteristic of instruments that have a bright, brassy sound. What this means is that the tubing of the instrument stays approximately the same diameter throughout the instrument. Pretty much any trumpet manufacturer in the market will produce beginner, intermediate, and professional Bb horns, with corresponding price points. 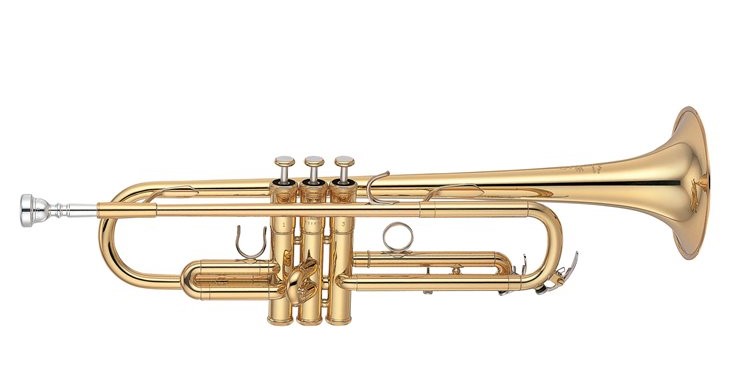 Cornets, like most trumpets, are also pitched in Bb. Despite the tubing being the same length as the trumpet, it is wound much tighter, giving the impression that it is a smaller instrument than the trumpet itself. Some schools do tend to start beginner players on a cornet because it is a bit easier to hold due to its compressed length, making the cornet a few inches shorter than the trumpet.

Often times when the instrument is too long, young trumpeters drop their bell and play into the floor, which is a difficult habit to overcome. Though the weight of the cornet and trumpet tend to be similar, the balance point on a cornet is nearer to the body and is easier to hold for smaller frames.

Traditional cornets often feature a "shepherd's crook," which tend to be models with larger bores and warmer sounds. The crook itself is mostly cosmetic in nature, but is almost always indicative of a cornet; trumpets never embraced this convention.

When it comes to the ease of playing each instrument, cornets tend to be more responsive in the lower register. But many musicians find that the A (middle of the staff) and above is easier to play on the trumpet.

While the trumpet has the characteristic "brassy" sound common in bands and jazz, the cornet has a much rounder tone. This is because the bore of the cornet is conical, which means that the tubing gradually increases in diameter over the length of the horn.

Trumpet vs. cornet in ensemble playing?

While it's not uncommon to see a mix of cornets and trumpets in concert bands, trumpets are typically the predominant instrument.

Interestingly enough, this has not always been the case. In the 1920s, cornet virtuoso Herbert L. Clarke penned a letter describing trumpets as a fad, and not intended as a solo instrument.

But as jazz came into greater popularity, manufacturers reduced the edginess of trumpets at the time so that a single trumpet could be used in band, orchestra, and jazz, thus reducing the need for cornets.

In British brass bands and military-style bands, it is much more common to see orchestrations calling for both trumpets and cornets, with parts designed to capture the color of each instrument.

In the end, some musicians argue that the differences between modern cornets and trumpets are exaggerated, and that the greater differences can be found in the more funnel-shaped cornet mouthpiece and playing styles of the performer than the instrument itself.

While the flugelhorn shares many similarities with the cornet (it is also a Bb instrument and has a conical bore), its even wider bore and larger bell gives it a uniquely mellow and dark timbre. Flugelhorns are most commonly used in British brass bands and in jazz bands. Whereas fanfares and technical passages are largely reserved for trumpets, flugelhorns are prominently used in lyrical, melodic passages. 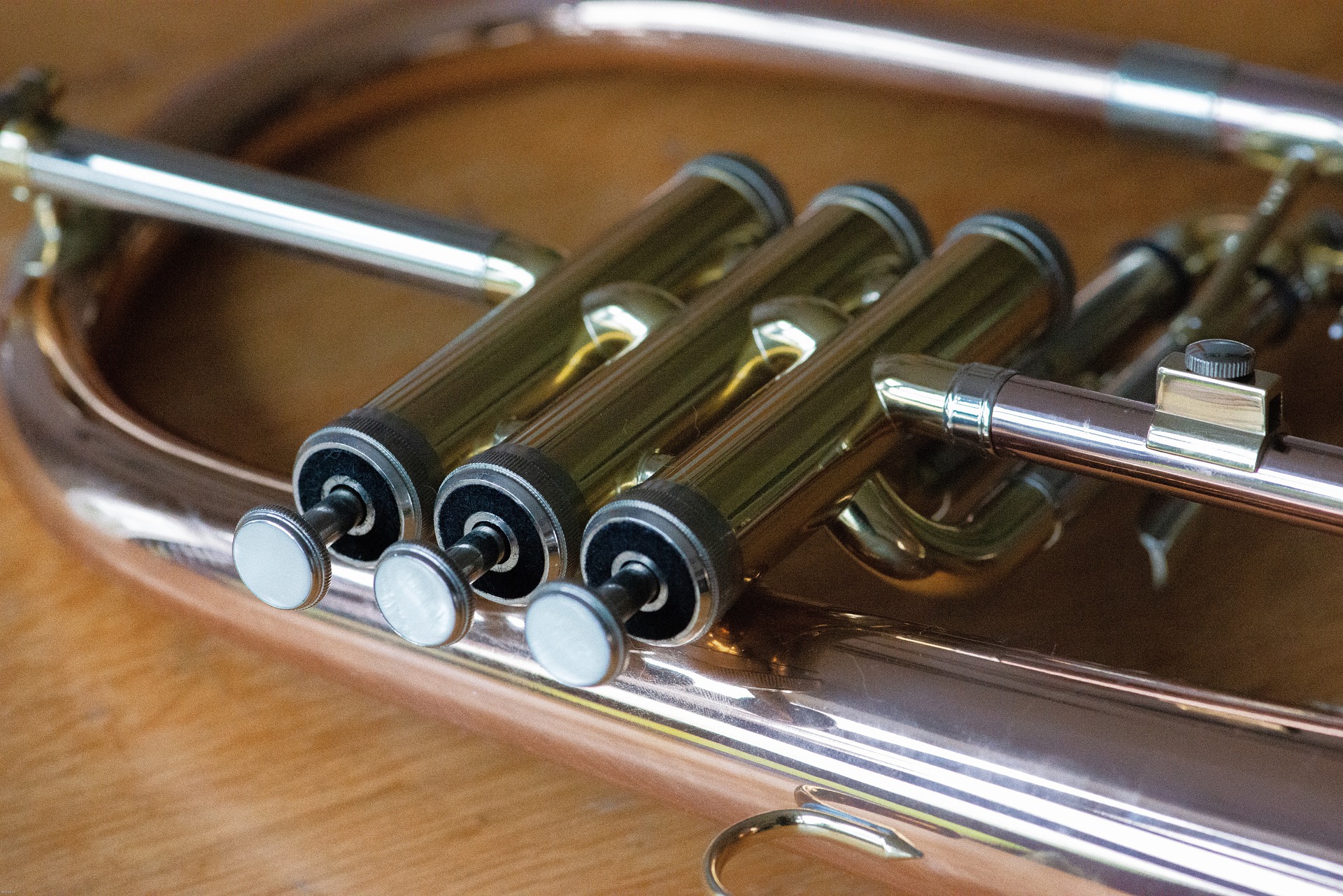 Perhaps the chief complaint about flugelhorns is regarding tuning issues. Many flugelhorns are equipped with a spring-loaded third valve slide to help with notes like low C#.

In addition, there are several four valve options for flugelhorn that work similarly to the added fourth valve on the euphonium or tuba. This gives the player alternative fingerings to utilize to keep the instrument more in tune.

Before purchasing a four-valved flugelhorn, make sure to test one out yourself as it does add additional weight to the instrument.

Every little bit of added weight can make a difference when you have longer performances, so you may prefer to rely on the third valve slide rather than the addition of a fourth piston.

When it comes to mouthpieces, a flugelhorn mouthpiece is funnel-shaped, whereas a trumpet mouthpiece has more of a rounded bottom. This allows air to flow more freely throughout the instrument; you'll notice that a flugelhorn tends to be much more responsive than its trumpet counterpart.

Because trumpeters typically double on flugelhorn (there are not many non-trumpet playing flugelhornists), it's important to spend time practicing on both instruments and transitioning back and forth.

Due to the heightened responsiveness of the flugelhorn, switching back to trumpet can be met with additional resistance.

On the reverse side, it can be easy to overblow on the flugelhorn.

To avoid this, I recommend starting warmups first on the trumpet before transitioning to the flugel. Once you have warmed up on trumpet, practice some long tones or scales on the flugelhorn.

As you move through your warmup, test different dynamics, especially listening for any sound discrepancies that would indicate you are blowing too hard on the flugelhorn. Try to back off just enough to find the point with the greatest resonance without sacrificing the tone.

C trumpets tend to be much more common in orchestra than in band. Characteristically, they tend to have a bit of a brighter, clearer tone which is helpful when you need to cut through the orchestra.

When is the best time to consider purchasing a C trumpet?

Even though many high schools around the country feature symphonic orchestras (combining the best wind and percussion instrumentalists from the band with the string players in the orchestra), I don't think it's necessary to purchase one until you are already in college.

During college, you'll get a better feel of what kind of repertoire you'll be performing, preferences of your trumpet professor, and prioritizing what instrument acquisitions would be most beneficial for you. It's during this time that many players upgrade their primary Bb horn, others purchase Cs, and jazzers pick up a flugelhorn.

Word of warning to college players looking to switch to C for the first time, it can be a little jarring if you have perfect pitch or solid relative pitch. Initially it's going to feel a little strange using the same finger combinations, and suddenly the pitch sounds higher than you are used to.

This, of course, is not a long-term problem, but you will want to give yourself enough time to adjust.

Piccolo trumpets are commonly used by musicians who are performing Baroque trumpet music in place of performing on a natural trumpet, though quite a bit of more modern literature has been written for the instrument as well.

A piccolo trumpet commonly comes with two interchangeable lead pipes that allow the instrument to be pitched in A and Bb.

From a transpositional standpoint, since much Baroque literature is in keys like D, it can be easier to transpose up a perfect fourth on an A piccolo rather than Bb.

Aside from being half the length of a traditional Bb trumpet, its most unique physical characteristic is the addition of a fourth trumpet valve.

It's important to remember not to overblow. With the instrument being only half the size of a standard trumpet, you simply won't need as much air.

Unlike with a standard trumpet, you'll need to train yourself not to breathe at every opportunity, and to not let your lungs fully inflate with air.

In this section, we'll examine instruments that are commonly manufactured not due to a specific color needed for an ensemble, but rather for convenience.

Despite its smaller appearance, the pocket trumpet is also a Bb instrument of the same overall length as your standard Bb trumpet. It is wrapped tighter, which shortens the length from mouthpiece to bell.

Unlike most of the other trumpets that add various colors in terms of sound, the pocket trumpet is purely a cosmetic adaptation.

Most trumpet players agree that the pocket trumpet is only ever helpful if space is at a premium. They're great for taking on vacation when you need every extra bit of space.

While there are some quality pocket trumpet manufacturers like Jupiter and Kanstul, the majority that are flooding the market are cheaply made and cheaply priced.

They're great for pep bands or other events where there is potential risk of damaging your more expensive horn.

The plastic is also beneficial if you're playing outdoors in the cold as the instrument won't feel cold to the touch like your metal instrument would.

I wouldn't recommend purchasing a plastic trumpet as your primary horn, but it can be a fun backup instrument to take on vacation or for athletic performances.

The History Of The Natural Trumpet

How To Choose A Beginning Trumpet Mouthpiece