Mozart's contribution to the flute repertoire, while minimal, was significant; most notably, his two concerti for flute and orchestra. However, with regard to the flute quartet, Mozart pinned four separate works:

What is a Flute Quartet

You may be familiar with the term flute quartet as it relates to works arranged for four flute, or two flutes, an alto flute, and a bass flute. This type of quartet stems from the vast, but recent flute choir tradition.

However, in Mozart's time, a flute quartet was more traditionally a flute, violin, viola, and cello. In a sense, it was a string quartet, where a flute subbed out for one of the violins.

However, this orchestration allowed for a more playful interchange between the flutists and the violinist, as their two timbres were markedly different.

This was an ensemble that was composed for often in the 18th century.

Mozart's four flute quartets are perhaps the most notable, at least in regards to the classical era compositions for the ensemble.

Dr. Ferdinand Dejean (1731-1797) was a surgeon, working for the Dutch East India Company and later became a rather wealthy physician. Dejean was an amateur flutist, and, like any good musician with a lot of money, he sought a notable composer of his time to compose some music.

Dejean was the benefactor who had the works for flute and orchestra, as well as the first three of the four flute quartets written.

You may or may not be familiar with this particular piece, but it is arguably the most well known of the Mozart flute quartets. It consists of three movements:

This piece is most notable for its B minor middle movement, a key that was rare for Mozart, and maybe be the musical precursor to Mozart's A major piano concerto.

Unlike the first quartet, this one is only in two movements:

This is a bit more scaled back from the first quartet, consisting of only two movements - a lyrical andante and a brisk minuet, both relatively simple in form.

It is believed this work was written several years after the first two quartets but still at the request of Dejean. It consists of two movements:

This piece has some DNA from another major chamber work, his Grand Partita, the Serenade in Bb, K. 361, for 13 winds. This seven-movement work consists of an andante theme and variations as its sixth movement. The second movement of this flute quartet is simply a transcription of that work for this orchestration.

It would be interesting to know if that was at Dejean's request, or if Mozart was just cutting corners. Or, maybe Mozart really liked that movement and wanted to reuse it in this setting? 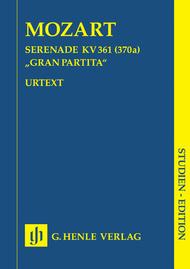 This is the only one of Mozart's four flute quartets that is assumed to be written not as a commission, but, essentially, for fun. It was written much later in Mozart's life, and is a great access to Mozart's later style for this ensemble. It has three movements:

For some reason, reading that, I just hear Mozart laughing as portrayed in the film Amadeus.

These flute quartets are wonderful works to play or to listen to. Fortunately, many have been arranged for flute and piano, so if you lack access to a string trio, then you can still learn and explore these works. 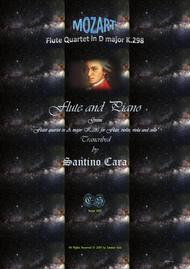 I also find it fascinating how the personal passions of one individual can have had such a profound impact on the repertoire for centuries to come. Thank you, Dr. Dejean!

Photo by The United States Army Band | CC BY